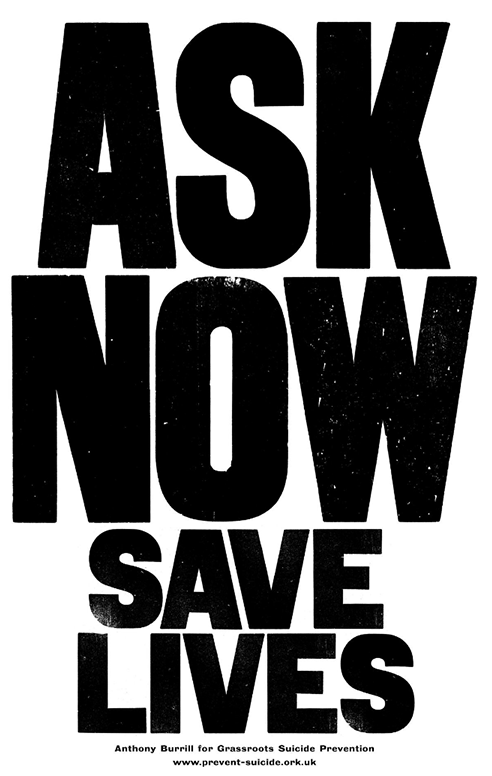 Ask the questions that save lives

When life gets tough, connecting with others can make all the difference. But reaching out can feel impossible. Particularly when thoughts of suicide are involved.

That’s why we all need to bravely ask the questions that matter. To ask for support when we need it. To ask those struggling to cope if they are having thoughts of suicide and to listen to what they say. To show that we care.

Ask Now Save Lives is a movement against suicide. People are learning how to ask the sort of questions that save lives. Then they’re getting others to do the same. Together, they are keeping us all safer from suicide.

Join the movement – become a lifesaver.

Join the movement and
learn how you can
prevent suicide

Get your
#AskNowSaveLives t-shirt
and join the online
campaign

Make an instant difference
to people and their
communities

“Even if someone is smiling, going to work – none of those things mean they can’t be thinking about attempting suicide. Ask them. You cannot cause someone to end their own life by openly asking. And you could end up saving a life.”

“Due to stigma, people often worry about asking if someone is having suicidal thoughts. But talking about suicide does not give people the idea to try it. In fact, it means they are more likely to explore other options or ask for help.”

“People often look at suicide and think it’s a selfish thing to do, which is wrong. I’ve had suicidal ideation and sometimes it because that feels like the way to protect the ones you love. That’s what I want people to understand.”

Hear Alastair talk about his experiences

“Suicide is an urgent health issue. But there is hope. With your help, we can prevent suicide. You can help save lives by talking openly and honestly about suicide – you just have to ask.”

“I have seen the effects that suicide has on people. I never want another family to suffer. I don’t want someone to ever feel that suicide is the only option left. It never is, and it never should be.”

“I’ve lived with suicidal thoughts. Nobody should have to do that alone. We shouldn’t be afraid to ask that question – ‘Are you feeling suicidal?’ We need to get more confident talking about suicide and remove the taboo.”

Join us today – learn how you can prevent suicide